In prepration for the 1893 Chicago World’s Fair, a Minnesota Women’s Auxiliary Board was put together to create a design. They hosted a contest and from 200 submissions, local artist Amelia Hyde Center designed the winning flag.

It was embroidered by Pauline and Thomane Fjelde, sisters who won a gold medal for their work. The flag was officially adopted April 4, 1893.

In 1957, the flag was simplified for easier production and changed again in 1983, to reflect updates to the state seal.

This versio of the flag was officially adopted August 2, 1983.

The Minnesota flag features a field of medium blue charged with the state seal, centered.

In the 2001 North American Vexillological Association (NAVA) flag survey of United States and Canada flags, the flag of Minnesota was ranked 67th out of 72.

The original seal and coat of arms depicted a Sioux man in war attire fleeing into the distance.

This was seen as offensive and historically inaccurate, so the seal was updated in 1983 to depict the man riding his horse toward the pioneer. This was meant to include Native Americans in Minnesota history.

Still, many would prefer the flag be redesigned entirely, introducing bills and petitions to change the flag. None have been successful, yet. 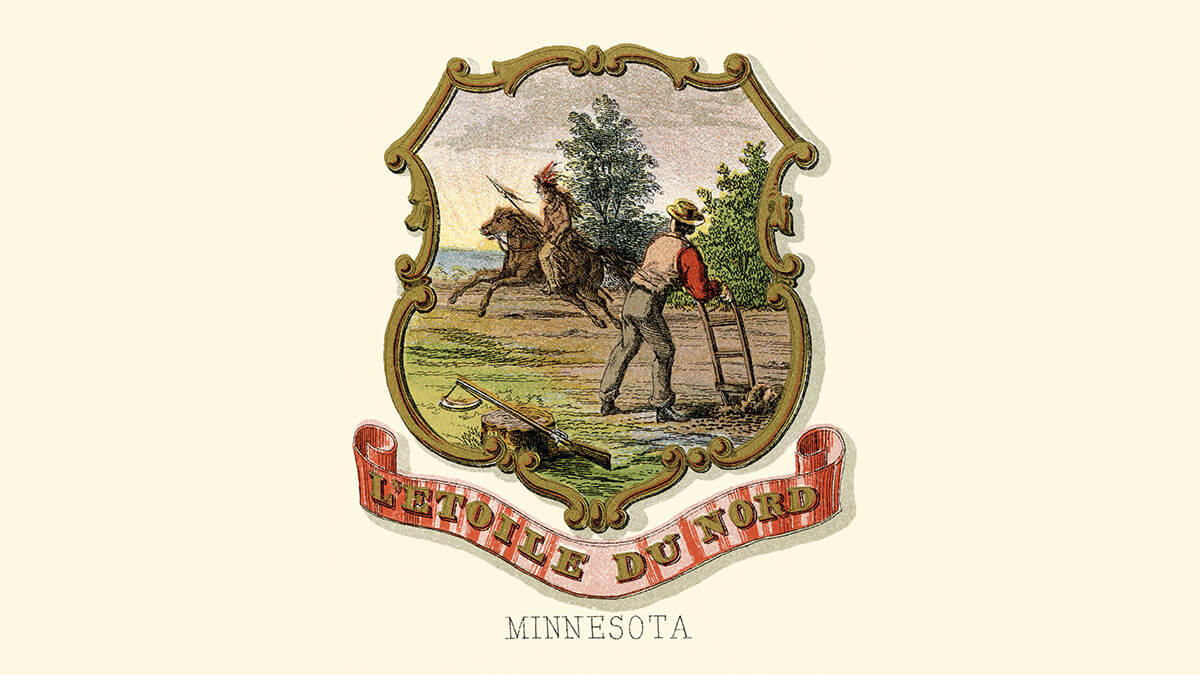 Once a royal blue, the field is now a “medium” blue, drawing inspiration from Union blue used during the Civil War.

Neither Minnesota law nor the Office of the Secretary of State provides Cable or Pantone values for the colors of the flag.The hex values here are approximations.
Medium Blue
#3d68c9
White
#ffffff
Gold
#fcb216
Red
#ed1a3a
Green
#60bb48

Minnesota statute does not specify a size or proportion for the flag.

It is often produced with the common proportion of 3:5.