Louisiana has flown many flags in its history, like the flags of Spain, France, and Great Britain. Leading up to and during the American Civil War, it flew four distinct flags including the Confederate battle and national flags.

Its distinct pelican flag was flown during the war, but it was not officially adopted until 1912. Variations were inevitable, many not including the three droplets of blood on the pelican’s chest. In 2006, the flag (and state seal) design was formalized and standardized.

This official version was adopted November 22, 2010.

The Louisiana flag features a field of blue charged with a crest, centered.

The crest depicts a mother pelican with her three chicks in a nest, wounding herself with three drops of blood on her chest.

Upon a white banner below the crest, the state motto, “Union Justice Confidence” is inscribed.

In the 2001 North American Vexillological Association (NAVA) flag survey of United States and Canada flags, the flag of Louisiana was ranked 36th out of 72.

The brown pelican is indigenous to Lousiana, but the symbology is also tied to Europe and Christian tradition. Described as “in her piety,” the pelican became a symbol of the Eucharist, where followers consume the blood of Christ in celebration of his sacrifice.

Pelicans were often observed as stabbing themselves with their bills, giving them a reputation of being attentive, self-sacrificing mothers.

The pelican has long been a symbol of Lousiana. Prior to the Civil War, the “pelican in her piety” was paired with the words “Justice Union and Confidence.”

After the war, when union and reconstruction were priority, the order was changed to “Union Justice Confidence.” 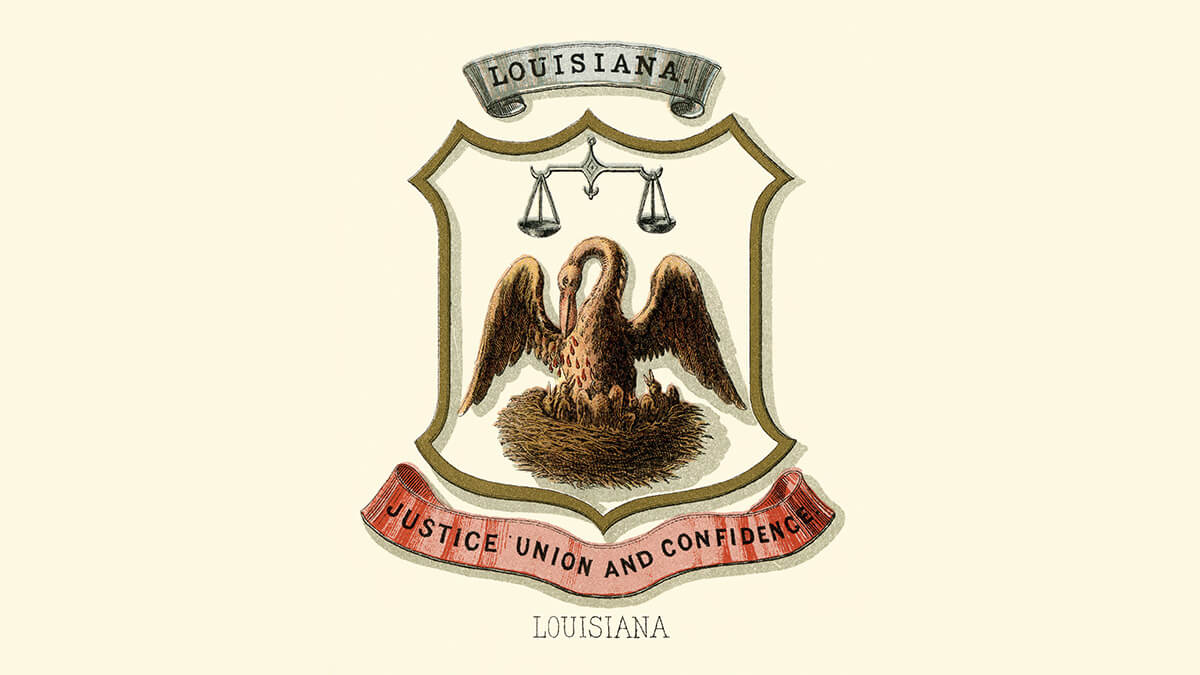 Louisiana statute specifies the Pantone colors featured on its flag.

The flag has a proportion of 7:11. Within this scale, the crest should be 5.25 units tall and 6 units wide.